Bob Martel Steven King photo HOLDEN — Certified hypnotist and President of the Massachusetts Commonwealth Chapter of the National Guild of Hypnotists (NGH), Bob Martel doesn’t own a pocket watch and he can’t take over his client’s minds with the snap of a finger. Stereotypes aside, Martel’s business, Positive Results Hypnosis, which recently relocated from Marlborough to Main St. in Holden, aims to help clients reach their goals using hypnotherapy.

Google’s definition of hypnosis may say it’s “the induction of a state of consciousness in which a person apparently loses the power of voluntary action and is highly responsive to suggestion or direction,” but in contrast, Martel describes it as a natural state of mind that we go into many times a day.

“You don’t reveal things you wouldn’t normally say, you are in complete control,” said Martel. “It’s simply about hearing positive suggestions in your subconscious.”

Getting to the subconscious, Martel explained, is as simple as remembering riding a bike for the first time. With clients, he uses a series of exercises to reach the subconscious and bring them into a deep state of relaxation. These exercises involve things like deep breathing while picturing a three-floor house. The house represents the levels of the mind, and as Martel leads his clients into a hypnotic state, they imagine traveling through each floor to reach deeper relaxation.

Martel also teaches his clients how to self hypnotize so they can use the relaxation techniques once their sessions are over.

Unlike traditional therapy, which can last years, hypnosis requires an average of 4 to 6 hour-long sessions. Depending on the issue, the price rate can range anywhere from $400- $700 dollars per program.

Within the first session, Martel can determine if hypnosis will work for a client. While anyone can be hypnotized, Martel said that it might not work for people with serious mental illnesses or for true skeptics. Having the will to be hypnotized is a big part of whether or not it will work.

“Everybody that comes in the door to see me brings with them the wisdom to resolve what they have come in for,” said Martel. “They have the knowledge. Sometimes they just need to be able to step back with clarity and focus on what they need to do.”

From smoking, to fear of flying and even weight loss, Martel has assisted clients with a wide variety of issues. He explains that helping them create new thought patterns leads them to new behaviors. His work also involves assisting clients in reframing situations that offer new perspectives to remove negative imprints.

For example, Martel said he helped a client with a fear of public speaking by getting to the root of the client’s self doubt by focusing on negative memories in the client’s past. Using mental exercises, he helped replace the client’s negative thoughts with positive ones.

“It’s about getting past that critical factor, so that subconsciously you can change,” said Martel.

Distinguishing his practicing methods, from the stereotypical assumptions of how hypnotism works, Martel explained that reaching the subconscious also doesn’t mean he can control minds.

“I can’t snap my fingers and teach someone how to play the violin for the Carnegie Mellon Orchestra,” said Martel. “I can help them to focus, picture that standing ovation and go after what they want with the confidence and determination to create that future.”

Martel gained his own confidence to make hypnotherapy his full time job eight years ago but his curiosity dates back to one of his first jobs where he was the teacher of a program called “Achieving Your Potential.” The program was aimed to help employees create better images of themselves .

“It was magical…this whole idea of self talk,” he said.

Martel went on to work as a marketing consultant and copywriter for many years and lost touch with this program but was reminded of it when covering an NGH event. After getting certified in hypnosis to better represent the NGH, Martel decided to make a career switch.

Since opening his practice in Holden, right above Flip Flops, Martel has been certified in other areas of hypnosis such as pain management which he looks forward to helping more clients with in the coming year.

Martel has high hopes that by being accessible to the surrounding communities that he can remove the mystery behind hypnosis.

“My real goal is to help people discover the truth about hypnosis so they can start enjoying the benefits,” said Martel. “This is a life skill, self hypnosis, the earlier someone learns it, the more control they have over their own life and their own happiness.” 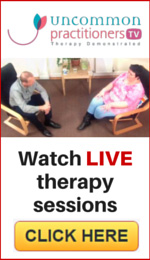