↓
Home→Change Your Life with Hypnosis MP3s→Can self-hypnosis apps help you think your way out of debt?

Can self-hypnosis apps help you think your way out of debt?

If you've been struggling to kick some bad financial habits, such as racking up debt and raiding your savings account, it may be time to take a less conventional approach. Some experts say hypnosis -- a method used to reprogram negative thoughts -- can give you the psychological edge you need. And with the proliferation of do-it-yourself apps, you can start changing your financial thoughts from the comfort of your own couch.

All of our beliefs -- including those about money -- are stored in our subconscious minds, explains Katherine Zimmerman, a certified clinical hypnotherapist based in San Diego. The goal of hypnosis is to access the part of our subconscious minds that holds a faulty belief so that we can change that at its core. 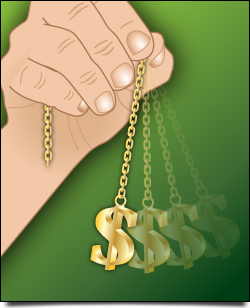 Hypnosis puts you in a relaxed meditative or hypnotic state. As your attention is focused on what the hypnotherapist is saying, he or she makes suggestions to you that are designed to empower you to make positive changes in your life.

You're basically replacing limiting thoughts with those that better serve you, says Nancy B. Irwin, a psychologist and therapeutic hypnotist based in Los Angeles. For example, the belief that you will never have enough money may cause you to spend frivolously because you don't believe saving is a realistic goal. Through hypnosis, advocates say you can plant the belief in your mind that you have the power to transform your finances.

With self-hypnosis apps, instead of a hypnotherapist guiding you through the process, you listen to an audio track instead. You are prompted to get comfortable and to make sure you won't be disturbed for the length of the track, which may run anywhere from a few minutes to an hour.

Most apps ask you to close your eyes and then start off with a guided meditation to relax you and draw your full attention to the present moment, says Susan J. Nathan, a licensed psychologist based in Laguna Hills, California, who incorporates hypnotherapy into her practice.

At that point, the speaker on the audio track will begin to make positive statements about money. For example, if the app is designed to help you get out of debt, the speaker may talk about how empowering it feels to put off purchases until you can pay for them outright.

When we place all of our attention on new ideas, "our brain patterning changes," says Nathan. As we listen repeatedly to new ideas about managing money while in that focused meditative state, we create new beliefs that can lead to changing habits, Nathan adds.

Since self-hypnosis apps relax you, they can also help you feel less uptight about financial matters. Adam Von Romer, a commercial real estate broker and author of the book "Getting Started in Commercial Real Estate," turned to self-hypnosis apps when he was feeling down on his financial luck after the real estate market slowed. After a couple of weeks, he says he felt less anxious about money. "I'd be listening to the tape and going through the relaxation exercises and half an hour later I would sit up wide-awake, completely reinvigorated and relaxed," he says.

Whether it was because he was more relaxed and productive or because the commercial real estate business had simply turned around, Von Romer soon noticed his sales pick up after he started listening to the recordings. "It seems to me that there is a correlation between what I've been doing and what I've been creating or manifesting," he says.

One of the biggest benefits of using an app is that it's easier -- and less costly -- than meeting face-to-face with a hypnotherapist. Self-hypnosis apps can be a good introduction to hypnosis and may work well "for those who have already identified the beliefs they want to reprogram," says Zimmerman.

However, those whose money problems are deep-rooted may be better off working with a professional. "A well trained hypnotherapist will ask probing questions and look deeper into what's going on," says Zimmerman. "That's where the benefit comes in over using an app."

Hypnosis versus hard work
While advocates claim self-hypnosis tapes can decrease anxiety around money and help people to learn new financial habits, not everyone sees the value in the practice. "Changing a habit is hard work," says David Patterson, a psychologist and professor in the Department of Rehabilitation Medicine at the University of Washington, Harborview Medical Center. Rather than listening to a self-hypnosis tape, Patterson suggests that people who have long-standing problems with money see a counselor who specializes in changing habit. By using a self-hypnosis app alone, "I think people are kind of nibbling at the edges of real change," he says.

Researchers from New York's Mount Sinai School of Medicine and Ohio State University studied a variety of hypnosis apps designed to help people achieve a multitude of goals, ranging from weight loss to financial success. While they pointed out that there is evidence that hypnosis can help people achieve certain goals, the researchers found two major drawbacks to using self-hypnosis apps. Some app developers do not have hypnosis training and experience, and many apps provide no evidence that they have been scientifically tested. "At best, apps not supported by empirical evidence are misleading, at worst, unethical," the researchers wrote.

But Irwin disagrees, saying that the use of self-hypnosis apps can make a positive difference as long as they are accompanied by action. "If people just think, 'All I need is to get hypnotized,''' they're wrong," she says. "Hypnosis causes a shift of mindset, but you must have action to go with it." The apps can help calm money fears, but in addition to listening to self-hypnosis apps, people must also develop a plan for changing their money habits, whether it's creating a budget, calling a credit counselor or consolidating their debt, she says.

You also have to be consistent, listening to the scripts over a period of time while you adhere to your new financial plan, experts say.

It's like going to the gym, Zimmerman says. "You may not see a difference the minute you step off the treadmill, but if you work out consistently you'll feel better and see results over time."

he treadmill, but if you work out consistently you'll feel better and see results over time."

GET ABOVE WATER BY GOING UNDER: 3 FINANCIAL HYPNOSIS APPS
Hypnosis app Cost Platform How it works
Develop a Millionaire Mind: Money and Success Programming by Wallace D. Wattles $3.99 iPhone You input your name and descriptions of your favorite relaxing place, and the meditation becomes a personalized journey toward wealth.
Money and Success Mindset Hypnosis by Mindifi $4.99 per app or $19.99 for 11 audios Android, iPhone This collection of financial hypnosis programs let you pinpoint your biggest money concern, with titles such as Become Debt Free, Financial Freedom and Frugality 101.
Hypnosis for Abundance and Money Attraction by Hypnosis Simply $2.99 Android, iPhone Choose between a male or female voice and choose the background music that puts you most at ease during the meditatio